When we talk about the Mahabharata, we fondly recall Lord Krishna, Arjuna, and Yudhisther. And then there are the Kauravas, the bad guys. The character we talk about the least is Karna – the ill-fated guy, the low-born king and the man who was accidentally cursed several times. We all know some of the stories associated with him, but we bring you the untold story of the previous birth of Karna that very few people know about : 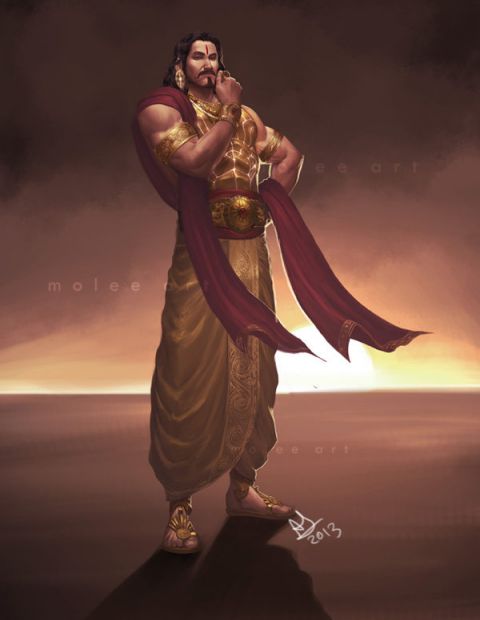 Story of the Previous Birth of Karna

Much much before the Mahabharatha, there lived as asura called Dambhodbhava. Dambhodbhava wanted to be powerful. So he prayed to Surya, the Sun God.

Surya appeared before him, ‘Open your eyes son! I am pleased with your devotion!’
Dambhodbhava bowed before him, ‘Lord! I am blessed to see you!’
Surya smiled, ‘I wish to grant you a boon! Ask anything from me!’
Dambhodbhava hid a smile, ‘My Lord! Please make me immortal!’
Surya frowned, ‘That is not possible! Everything that is born has to die! Immortality is out of question!’ 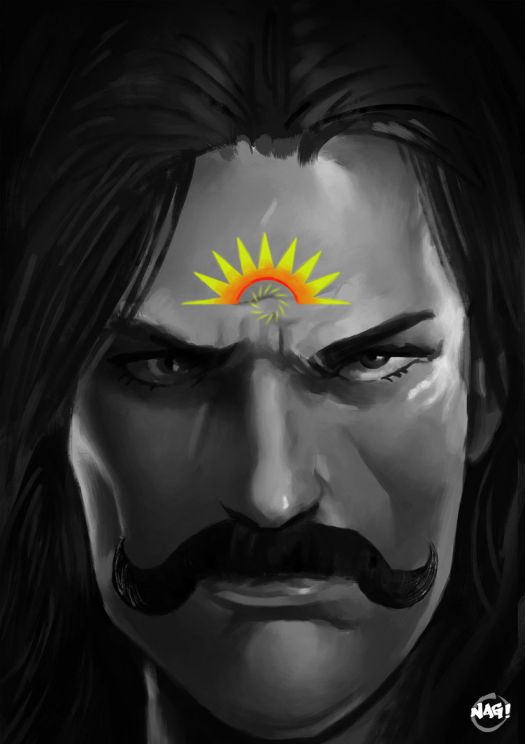 And the story of the previous birth of Karna continues.

Dambhodbhava’s shoulder drooped. He knew that no matter how much he asked, Surya would never grant him the boon of immortality. All the time he had spent meditating were a waste….

Surya stood there patiently waiting for Dambhodbhava to ask him when he suddenly saw a glint in Dambhodbhava’s eyes. Surya’s eye narrowed. Dambhodbhava bowed to him, ‘My Lord! If you cannot make me immortal at least grant me this boon!’ Surya looked suspiciously as Dambhodbhava continued, ‘I want to be protected by a thousand armours!’

Surya was horribly worried. He knew that Dambhodbhava had performed a very powerful penance and that he could get the entire boon he had asked for. And Surya had a feeling that Dambhodbhava was not going to use his powers for good.

However having no choice in the matter, Surya granted Dambhodbhava the boon. But deep down Surya still admired Dambhodbhava for the devotion with which he prayed to him… Surya’s worries were, however, correct. Immediately after getting the boon from Surya, Dambhodbhava started wrecking havoc on people. People were scared of fighting with him. There was no way of defeating him. Anybody who stood in his way was crushed by him. People started calling him Sahasrakavacha [meaning one who has a thousand armours]

It was around this time that King Daksha [the father of Sati, the first wife of Shiva] got one of his daughters Murti married to Dharma – one of the ‘Mind’ sons of Lord Brahma, the God of Creation [It is said that Lord Brahma created his mind sons or Manas putras from his thoughts]

Murti had also heard of Sahasrakavacha and wanted to put an end to his menace. So she prayed to Lord Vishnu to come and help the people.

Murti was happy. Subsequently, she gave birth to not one child, but twin sons. She named them as Narayana and Nara.

Narayana and Nara grew up in the ashrama surrounded by the forests. They enjoyed praying to Lord Shiva. Their mother also encouraged them to learn to fight. The two brothers learnt the art of warfare.

The two brothers were inseparable. What one thought the other was always able to finish. Both of them trusted each other implicitly and never questioned the other.

As time went on, Sahasrakavacha started attacking the forest areas surrounding Badrinath, where both Narayana and Nara were staying. The two sages promised the others that they would come and help them.

Sahasrakavacha bellowed looking at Nara, ‘You pathetic human! You really think you can defeat me! ME! The great Sahasrakavacha! Do you even know how I am protected! Do you know anything about me!’

Nara smiled and said calmly, ‘You want to talk some more or are you willing to fight me?’ 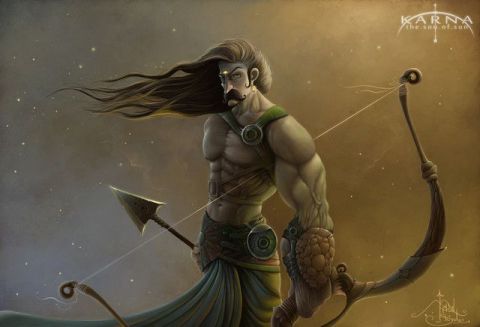 Sahasrakavacha looked at the calm eyes of Nara and for the first time since he got his boon, felt fear building inside him. He said nervously, ‘I can be killed only by performing penance for a thousand years. You cannot….’

Nara looked at Sahasrakavacha and spoke with you. ‘I have not done any penance….But my brother Narayana is doing it for me! And instead of him, I come to fight with you!’

Sahasrakavacha frowned and then started laughing, ‘Seriously, you cannot think that your brother’s penance would come to help you…! He is separate! He is not you! That does not count.’

Nara merely smiled at the monster, his weapons raised. Sahasrakavacha was now annoyed. This puny human was willing to challenge him to a fight and was not even remotely worried that fighting him would mean certain death for him and all for what? Destroying ONE of his armours….He still had 999 armours to go…

But Sahasrakavacha was not prepared for what happened next! He blinked his eyes as he saw Nara run towards him! Sahasrakavacha could not believe what he was seeing. He had just seen Nara die before his eyes!

Sahasrakavacha focused again and saw that the sage was not running towards him but towards the fallen Nara! Sahasrakavacha remembered what Nara had told him. Narayana….

Narayana smiled and looked at his brother. He closed his eyes and muttered a mantra. Sahasrakavacha could not believe his eyes when he saw Nara wake up! Sahasrakavacha cringed as he realised that Narayana had performed penance for a thousand years and had hence obtained the ‘mritunjay mantra’ [It was a mantra to bring back the dead to life].

Sahasrakavacha realised that he was doomed when Narayana picked up his brother’s weapon and challenged him to a fight. Nara now retired to the forest to perform the penance for the strength of his brother….

This went on. Both Nara and Narayana performed penance for a thousand years while the other fought with Sahasrakavacha. The minute Sahasrakavacha’s armour was broken, the person fighting with him fell dead only to be brought back to life by the other….(It is also said that one who performs penances in Badrinath for one day gets the same result as performing penances for thousands of years)

Sahasrakavacha lost 999 of his armours to the twins. Realising that he could never beat the two brothers, Sahasrakavacha gave up the fight and ran away. He decided to take refuge with the Surya as he was the one who had granted him the boon in the first place…. 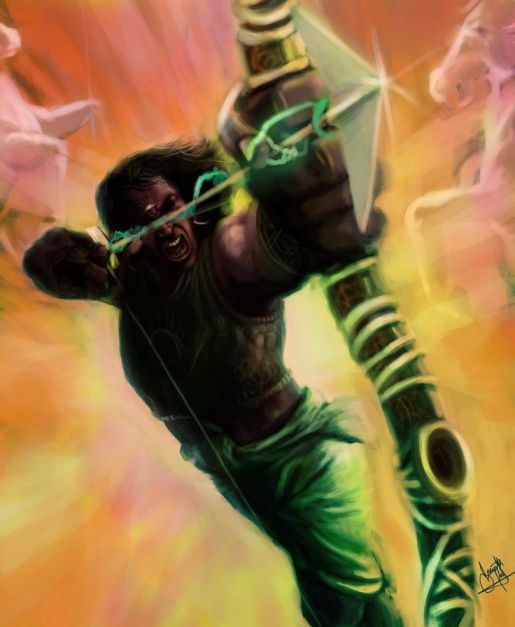 Narayana and Nara both went to Surya, ‘Hand over that monster to us now!’ Narayana said. ‘He has caused havoc to the people everywhere! He is a monster!’

Surya slowly shook his head, ‘My Lord! Despite everything this man has done, he is my devotee! He has worshipped me with unparalleled devotion! And he has come to me for help!’ Surya vigorously shook his head. ‘I cannot just turn him away now!’

Nara narrowed his eyes angrily. He pulled out some water from his Kaman Dalam and threw it on Surya and cursed him. ‘You have gone against my Narayana! He asked you for something and you refused! For this I curse you that you would be born as a human and suffer for this!’ Surya bowed his head. He knew that he should not have sheltered a monster but he was willing to pay the price for his devotee.

Immediately after Surya refused to part with Sahasrakavacha, the Treta Yuga ended and the third Yuga started.

At last, to fulfil the promise to destroying Sahasrakavacha, Narayana and Nara were reborn – this time as Krishna and Arjuna.

Due to the curse Dambhodbhava and Surya together were born as Karna, the eldest son of Kunti! Karna was born with one of the armours as a natural protection, the last one left of Sahasrakavacha. 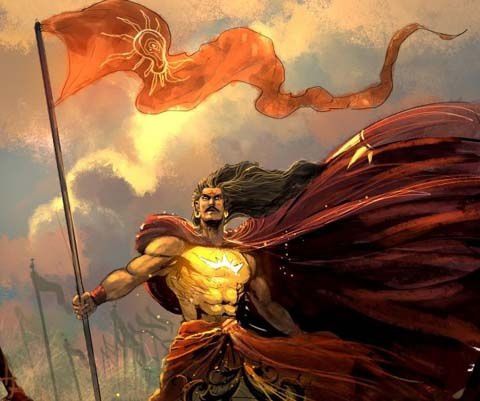 Also, share your thoughts on this story of the previous birth of Karna.