The rule of Thor’s mystical hammer is simple : “Whosoever holds this hammer, if he be worthy, shall possess the power of Thor”. Anyone who is familiar with Marvel universe will know that even some of the mighty superheroes were not able to lift Thor’s Mjolnir. As seen in the last Avengers movie, only Vision was able to lift Thor’s Hammer. But, as per the Marvel’s Comic series, there are few other superheroes who were able to do the task. Let’s check them out: Thor lost the hammer during his matchup against Captain Marvel. Wonder Woman would pick up Mjolnir with ease during her battle with Storm but didn’t want the unfair advantage so refused to use it. Black Widow may be the most underrated member of the Avengers in the films. The Marvel “What If?” series created a world in which Thor was dead and that led to Natasha Romanoff being the one that possessed the power of the god. She picked it up based on being the next person worthy of the hammer. 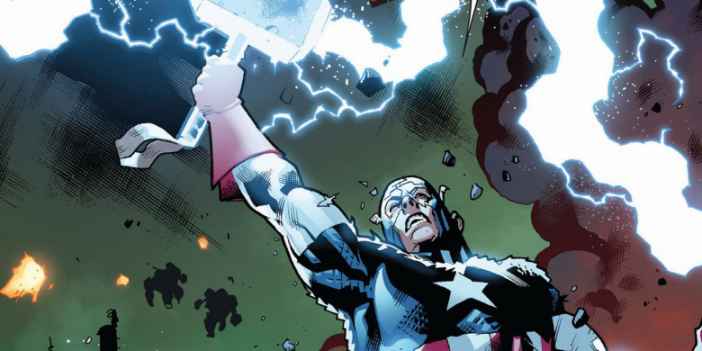 Captain America was able to lift Mjolnir on multiple occasions in the comics during Avengers stories. Captain America used it in battle when his patented shield broke during the fight. Not many are aware that Deadpool was one of the rare heroes to lift Thor’s hammer in one of the comics. The story plot was manipulated by Thor’s evil brother Loki making Mjolnir invisible and Deadpool picked up a fake one also made by Loki to create chaos between everyone. When the Justice League of America and The Avengers meet in a Marvel & DC crossover, one of the more pivotal moments featured Superman lifting Mjolnir. Superman was by far the most powerful DC superhero present and used the hammer to defeat one of the villains. The interesting twist later saw Superman unable to pick it up again to hand back to Thor. It showed that the ability that can change based all on when one is worthy enough to hold it.