You may have read somewhere on the Internet about the rain of animals where people often see flightless animals falling from the sky and the phenomenon is called Rain of Animals. Many occurrences of the ‘Rain of Animals’ have been reported by the people from different parts of the world throughout history. Most common creatures that fell from the sky are fish, frogs and even snakes.

Scientists over the years tried hard to find out the reason behind these weird phenomenon but until now no one has come up with an appropriate reason for these weird happenings. Although Rain of Animals has been a rare sighting but the occurrences reported are way back from the 1860s. 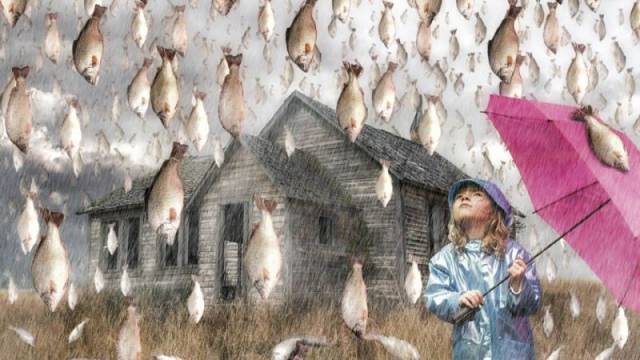 The latest sighting reported was in July 2016 at Mumbai-Pune Express Highway, Maharashtra, India when people reported fishes falling from the sky. The most common explanation given by the scientists is that ‘Tornadic Waterspouts sometimes pick up creatures for up to several miles, followed by a storm and the storm throws these creatures on the land resulting in this rear phenomenon.‘ However, scientists have never witnessed this kind of phenomenon themselves and it is one of the biggest mysteries of all time. Related: 10 Natural Phenomena That Look So Beautiful And Surreal.

Do let us know if you have ever experienced this ‘Rain of Animals’ or if you have heard about this weird phenomenon and if you are in a state of shock after reading this, do share this post with your friends and loved ones.