If you think that Deadpool, Hulk or Living Tribunal are the most powerful Marvel character in the Marvel Universe. You can see on various platforms like Quora, community Q&A etc, that people want to know about that mysterious person. Today, we are going to reveal the identity of that supreme being that rules over the whole Marvel universe. Furthermore, that mysterious character is also called as God of the Marvel Universe. Without further wait, check out the most powerful marvel character ever created by the Marvel writers.

Apparently, Marvel Comics has revealed the most powerful character ever. And he is none other than One-above-all. One Above All is the Supreme Being of Marvel and master of the nigh omnipotent entity known as the Living Tribunal, whose faces, embodying Equity, Vengeance and Necessity respectively, are in perfect alignment with one another as it passes judgment.. He is the only being in the Marvel Omniverse with omnipotence. Though the character has not appeared frequently in the Marvel Comics, but still he is the most powerful marvel character. In addition, he is responsible for the existence of all life in the Multiverse and possibly beyond. While you may not have noticed One Above All in various Marvel comic episodes. The character seemingly appears to the Fantastic Four in “Heaven“, at the time of the Thing’s death, praising them for their persistence in exploring the Marvel Universe. And promising extraordinary new wonders to be discovered in the years ahead, and eventually restores the Thing back to life. Also, a grieving Peter Parker is encouraged by the One-Above-All, disguised as an elderly homeless man, to keep faith, when his Aunt May lay close to death.

Moreover, Thanos and an alternative version of Adam Warlock gained a brief audience with the entity after their reality had been destroyed. It was here revealed that the One-Above-All is also called the “Above-All-Others“, exists beyond time and space, and alternates between appearing as male and female. Thanos managed to convince the entity to restore reality, in exchange for Adam taking up the empty position, and duties, of the deceased Living Tribunal. 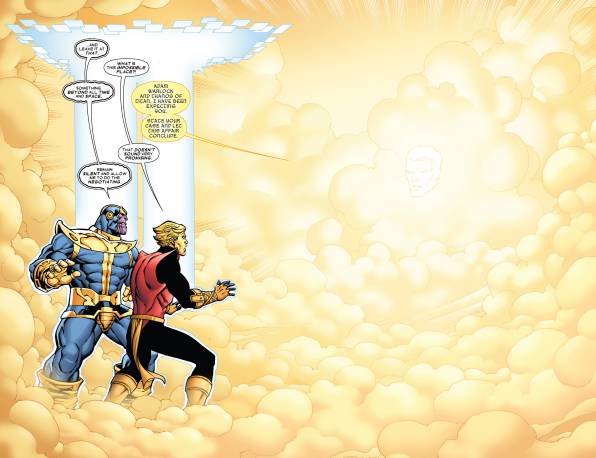 Also, check out: Marvel Vs DC Is Really On The Cards? What Stan Lee Thinks?

One-Above-All is Omnipotent (All Powerful), Omniscient (All Knowing), and Omnipresent (Everywhere). His power is unlimited, incalculable and immeasurable. Also, his strength is unlimited, he cannot be damaged in any way and he has control over all forms of energy. Because he is Omnipotent, he wields every power.

Also, let us know which one of the other Marvel Character can overpower the Marvel Most Powerful Character- One-Above-All.