We think most of you are familiar with the name of the famous actor and comedian Jim Carrey. Today, we are going to share his inspiring story and talk about Jim Carrey’s Depression.

Carrey has been known to pull off some great roles like Mask, Dumb and Dumber, Liar Liar etc. While for those of you who don’t know him, well Jim Carrey is a Canadian-American actor, comedian, and producer. He was born on January 17, 1962, in Newmarket, Canada. Carrey grew up with an ailing mother and an unemployed father and had to drop out of high school in order to support his family. In 1978, he took a factory job as a Janitor to help make ends meet. While in 1979, he left the job and was making his living as the opening act for successful comics Buddy Hackett and Rodney Dangerfield.

In 1983, the comedian turned to Hollywood where he starred in a television movie called Introducing…Janet. Around 1990, when Jim Carrey was a struggling comic trying to make his way in Los Angeles, he drove his old Toyota up to Mulholland Drive. While sitting there looking at the city, he wrote a check of $10 million himself, dated it Thanksgiving 1995, and added the notation “for acting services rendered,” and carried it in his wallet from that day forth.

The rest, as they say, is history. The actor gave some of the huge box office success Ace Ventura: Pet Detective, The Mask, and Dumb & Dumber. And by the end of 1995. his fees per film had risen to $20million.

Also, check out: Rags To Riches: Life Story Of Dwayne ‘The Rock’ Johnson & His Journey

No matter how goofy or wacky he appears on camera, Jim hasn’t had an easy life. Depression was a constant battle for Carrey, and he was medicated off and on for years. He had to drop out of school to take care of his mother. Moreover, he has been through two broken marriages and failed relationships. 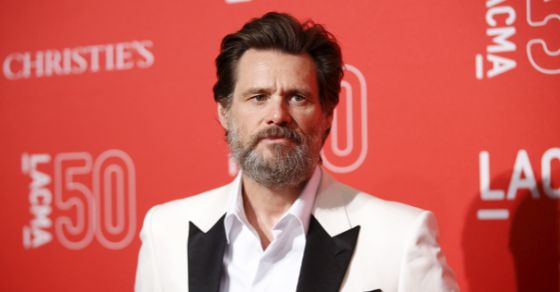 Moreover, days after his break-up with his then girlfriend, Cathriona White. The girl committed suicide due to depression. Jim Carrey said that the death of his former girlfriend, Cathriona White, had left him feeling as if he had been hit with “a lightning bolt”. He has been on and off Depression for many years in his life. But now, Jim Carrey’s Depression is no longer a problem, all thanks to spirituality. He has battled the depression with laughter, being spiritual and won against it. He says, “My focus is to forget the pain of life. Forget the pain, mock the pain, reduce it. And laugh.“.

Also, let us know if this Jim Carrey’s depression story inspired you for life. And make sure to share this story with your friends and loved ones to inspire them too.